Seacoast Council meeting is held the second Wednesday of each month at 7:00pm 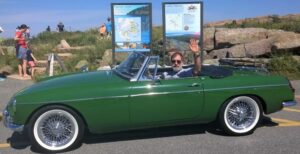 Brooklyn, NY, is no place for an MG, so upon college graduation there, Charlotte, I, and the B all moved to N.H.

The New England MG Car Club formed in southern Maine around 1987, and that year we made our first club trip to Niagara Falls for the American MGB Association convention.

Charlotte and I have since traveled extensively in the MGB. We’ve been back to Niagara Falls, around the Gaspé Bay in Quebec, to Nova Scotia and Prince Edward Island a dozen times, and further to Newfoundland and the Isles de Madeleine.

The NEMGCC merged with BCNH a few years ago and I volunteered to be the prime minister of the Seacoast Council.

For the last 15 years I’ve been a partner at Brit Bits, where I’m surrounded by little British cars all day long.

After all these decades, the MG hobby and the friends we’ve made in the MG clubs, continue to be awesome. 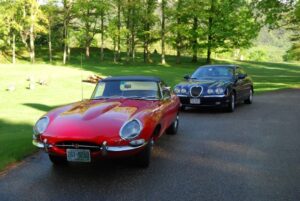 My full name is Arthur Robert Gardner which can lead to confusion as my friends call me Rob and the authorities and phone salespeople call me Arthur. In BCNH please call me Rob.

I grew up in England in the 1960’s and 1970’s before emigrating to Canada in 1980. In these formative years I had a series of LBC’s. My first car was an Austin A40 Farina lots of rust but it worked this was followed by a 1962 AH Sprite MK2 (also lots of welding required) and a Triumph Vitesse Convertible.

After emigrating work and children kept me away from LBC’s for several years but in 1987 we bought a 1962 series one Jaguar XKE Roadster in terrible condition. We were living in Ontario at that time and I commenced to dismantle the car.

In 1990 we moved to New Brunswick on the Atlantic coast. The Jag came too still in pieces but with the engine fully rebuilt. 14 years later the company I was working for transferred me to their Portsmouth NH office. We moved to Durham and the Jag came too still in pieces! Importing a classic car fully dismantled was interesting but we found the right sort in the US customs and it was judged to be a classic car not a collection of parts.

Over the following years with lots of parts from SNG Barratt and lots of body work by the very talented Nick Dimayo the car was on the road. We joined JANE and the first major outing was the 2013 Magical Mystery Tour. We met some great people at that event many who were BCNH members.

One thing led to another and we joined BCNH. We attended exploratory meetings in Kittery and Dover where the possibility of a Seacoast Council was discussed. With the support of Bob Mitchell we agreed to give it a go. Norm Michaels and I agreed to split the leadership role to get it started. The reality is that Norm and Ben Morong do most of the work and I attend when present. 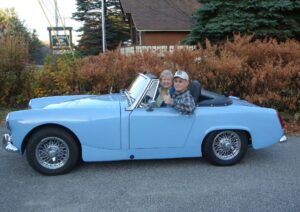 Ben has been a member since his previous club, the New England MG Car Club, merged with BCNH a few years ago. His first LBC was a $30 Bugeye Sprite in 1966, and he’s owned Sprites or Midgets continually ever since. His current car, a 1969 Midget, was a derelict lawn ornament when he first saw it in 1994, and soon it was his. With some patches, wiring work, and a used transmission, it was on the road and has now travelled all over New England and as far south as North Carolina (trailered).

Ben and his wife Candy enjoy club rides, shows, and other gatherings, and evening rides around the York, ME area with their two dogs. He also has a 1959 Austin A40 Farina (modified with a Midget engine, transmission, front suspension and brakes), along with a few more project cars.