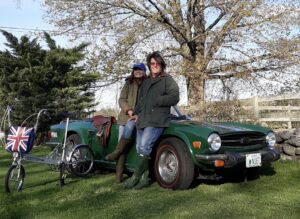 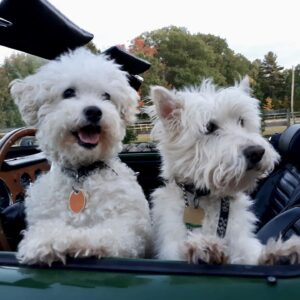 Mike Sweet started the monarchy of British Cars of New Hampshire with six couples on a cold winter’s night in February 1991. His love of Great Britain was forged from years of playing and collecting Matchbox, Corgi, and Dinky cars and a love of James Bond movies. At the age of thirteen, a couple of guys in a Morgan passing through his hometown took the time out of their journey to talk cars with him, surprised that a very excited kid in a small town even knew what a Morgan was. He knew then that British car owners were cool.

His first car at the age of sixteen was a 1972 MGB, and in the past forty three years has had a 1970 and 1976 Triumph Spitfire, 1962 TR4, 1973 MG Midget, 1971 Jaguar XJ6, and a 1991 Mazda Miata just to shake things up. Now a small, odd collection of English bicycles takes up a bay of the garage. His furry friends Nellie and Yoshi are always eager for a ride or biscuit, usually the latter.

Mike and Deb enjoy driving their TR6 any chance they get, exploring antique shops, craft breweries, and the backroads of New England. 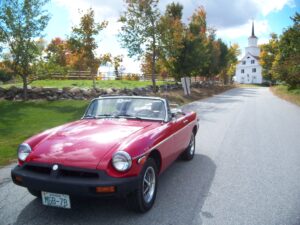 In 1968 I bought a new MGB. It was simultaneously the worst car I ever owned (I walked a lot) and the most fun car I ever owned. One dark and rainy night, as I lay in a puddle of water on the side of the road fixing the starter motor, I swore I would never own another British car. In 2004 I bought a low mileage 1978 MGB and named it “Recaptured Youth”. I joined BCNH that year because I wanted to go on drives with other Little British Cars and I wanted to make friends with people who could help me fix mine when it broke down. It has, thankfully, proven to be a much better car than the ’68. I live in the Monadnocks where the roads are perfect for a Little British Car. 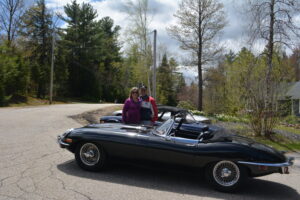 Norma and Rod have been a member since 1996. She owned a 1974 TR6 when she and Rod joined the club. Rod owned a foreign car service business and purchased a white MGB and brought it home for Norma to drive. Next thing she knew he sold it. He purchased another one – he sold that one before she was able to drive it. So, she had to buy her own car he couldn’t sell and purchased a 1974 TR6 she saw on the side of Rt 111. They joined just after attending the car show that was held as part of the High Hopes Balloon Festival. The monthly meetings, drives and member camaraderie are what enticed them to join the club. Since then, they have accumulated two more cars a 1969 Jaguar E-Type and a 2006 Jaguar XKR (Norma’s Granny car). What’s a Granny car?– one you can get into when you get old because someday she won’t be able to get into the E-type! 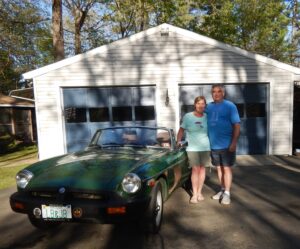 In 1994, Lou set out in earnest his long desire to own a LBC. He looked at several that sounded good in the ads but turned out to be disappointments. A few weeks later, while making a run to Litchfield Recycling Center, he noticed a LBC sitting on a knoll less than a ½ mile from his home. He made an immediate U-turn to check it out. It was a 1980 MBG that had been put out less than an hour before and it was his by the end of the day. In August of 1996, while at an ice cream stop in Manchester with his wife Jeannine, he was approached by Roland Bergeron, one of the oringal members of BCNH and told Lou about BCNH. Lou & Jeannine joined BCNH in September of 1996. Linda Cagan was the BCNH Director and also handled membership. Linda asked Lou if he could help her with part of the membership area and the following year, Lou took over as the Membership Director and has now held that position for over 20 plus years and has enjoyed seeing the membership grow from 165 members to over 300 during that time period.

Bob Mitchell joined BCNH in 2007 when a fellow Rotarian decided that it was time to “pass the torch” in the form of a 1952 MG-TD. Bob’s first introduction to BCNH was when he drove the TD from Stratham to the Show of Dreams that was held at the Budweiser Brewery in Merrimack that year. Two years later Bob started sharing Prime Minister duties with Wade dosSantos – and served in that role for 8 or 9 years. The rest is history.

Bob has owned seven British cars – with the Riley RMF and Triumph TR-2000 as his favorites – and now owns Historic Motor Sports in Candia (just east of Manchester.) 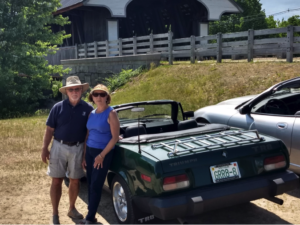 Bob has been a member of BCNH since 2005. He joined the club after registering his 1974 TR6 for the 2005 Show of Dreams at Strawbery Banke in Portsmouth, NH. That Show of Dreams gave Bob a glimpse of BCNH, the activities available to the Members and the wealth of British car knowledge to be gained from becoming a member. Since that time, he has attended the monthly club meetings, volunteered to work at the 2006 Show of Dreams which eventually lead to Show of Dreams Directors in 2008. Three more British cars have been added to the garage: 1969 Triumph GT6, 1980 Triumph TR8 & 1983 Jaguar XJ6. Joining British Cars of NH has given Bob the opportunity to spend time with like-minded friends interested in keeping Little British Cars on the road.

Diana has been a member of BCNH since 2005. She joined the club after registering their 1974 TR6 for the 2005 Show of Dreams at Strawberry Bank in Portsmouth, NH. That Show of Dreams gave Diana a glimpse of BCNH, the activities available to the Members and the wealth of British car knowledge to be gained from becoming a member. Since that time, She has attended the monthly club meetings, volunteered to work at the 2006 Show of Dreams which eventually lead to her husband, Bob becoming a Show of Dreams Directors in 2008. Three more British cars have been added to the garage: 1969 Triumph GT6, 1980 Triumph TR8 & 1983 Jaguar XJ6. Joining British Cars of NH has given Diana the opportunity to spend time with like-minded friends interested in keeping Little British Cars on the road.

Want to be involved? Become a member!