Monadock Council meeting is held the Third Tuesday of each month at 7pm. 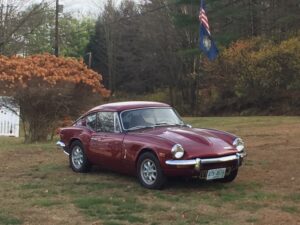 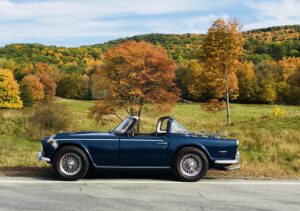 Brian joined BCNH on March 1 of 2017. He has owned at least one Triumph since 1966 (1960 TR3) and currently owns a 1970 GT6+ (since new) and a TR250 for 25 years. The GT6 just finished a 6 year restoration and the TR250 is going to have new paint this year since the last time this car was restored was 25 years ago. There a currently no plans on taking on another restoration project. Brian stays busy creating NLA parts for his cars and others using 3D printing technology. He joined BCNH after learning the club was starting up the Monadnock Counsel and knew the club would be a good opportunity to meet other area British car enthusiasts.

The Monadnock Council is the most recent group of British car enthusiasts to have been organized and taken into the fold of BCNH. Born from the need for a more localized group that is based in the south west corner of the state. Previously the closest Council was the Manchester area so for many of us that was a distance to far to attend the monthly meetings and then have an hour plus drive back home. Our group is centrally located so the Dublin/Peterborough area is our “hub”.

Ramona Branch was our original organizer; she’s a natural for pulling people together so our very first meeting was at her home. The initial gathering was well attended; Ramona and Jerry own a Jaguar so they were a perfect fit for this new group. After a lot of conversation and with guidance from existing members of BCNH, the Monadnock Council was born and Ramona was voted in as our first Minister. So in 2017 we started our monthly meetings at Brady’s American Grill in Peterborough. The group has planned numerous driving events over the past several years. Some are as simple as a nice cruise over back country roads, or visits to the many covered bridges in the area and then we also have destination drives. With the many challenges in 2020 and 2021 we have had to adapt to changing times so our monthly meeting locations will vary as we have to be more flexible. Meetings will be posted so as many as possible can attend. Currently we have close to 20 members in the Monadnock Council.

We have a diverse number of cars in our council- Jaguar, Austin Healey, Jensen Healey, MGB, Triumph, Aston Martin and Morgan are just samples. Any British car is welcome and we even have a few members with non-British cars. Owning a British car really isn’t a requirement, even if you have aspirations to own a classic then you’ll be welcome in our club. We think of ourselves as a social club that happens to own British cars.

After several years under Ramona’s guidance, the Monadnock Council is now well established so in 2020 Ramona passed the baton on to Brian Tilton to continue on as the new “Minister”. This club is a team effort and we have a great group of dedicated people who keep the club active. If you want the comradery of meeting with like-minded British car owners, live within a comfortable driving range of our “hub” then come join us, you’ll have some interesting times with us.